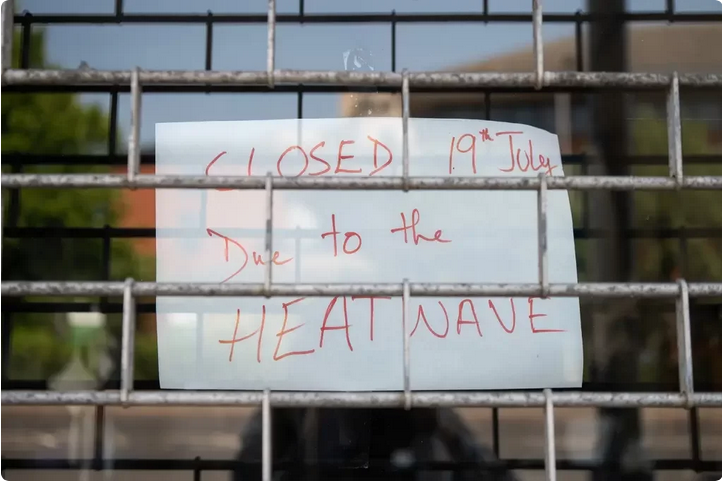 UK breaks all-time record for highest temperature in the country

Thermometers in the southern English town of Charlwood registered 39.1°C, up from the previous record of 38.7°C in 2019 – and authorities expect the temperature to continue to rise.

O UK registered the temperature highest in its history this Tuesday, the 19th, according to a provisional reading of the meteorology office from the country. Thermometers in the southern English town of Charlwood registered 39.1°C, above the previous record of 38.7°C in 2019 – and officials expect the temperature to continue to rise.

The new record comes amid the severe heat wave that has been sweeping Europe since last week. A large part of England, from London to Manchester, remains under the country’s first warning of “extreme” heat in the country, enacted on Monday, 18, when forecasts pointed to temperatures above 40°C in the coming days. The alert indicates that there is danger of death even for healthy people.

The UK’s Met Office weather agency also reported that provisional figures showed the temperature remained above 25°C overnight in parts of the country for the first time.

Exceptionally hot and dry weather has gripped large swaths of the continent since last week, sparking wildfires from Portugal to the Balkans and leading to hundreds of heat-related deaths. At least 748 heat-related deaths were reported in the heat wave in Spain and Portugal, where temperatures reached 47°C earlier this month. At least five people drowned across the UK in rivers, lakes and reservoirs as they tried to cool off.

In the UK, many people dealt with the heat wave by standing still. Road traffic dropped from its usual levels on Monday. The trains ran at low speed for fear that the temperature would cause problems on the tracks. London’s Kings Cross station, one of the country’s busiest rail hubs, was empty last Tuesday, with no trains on the busy east coast line linking the capital to the north and Scotland. London’s Luton Airport had to close its runway because of heat damage.

Transport Secretary Grant Shapps said the UK’s transport infrastructure, some dating back to Victorian times, “simply wasn’t built to withstand this kind of temperature – and it will be many years before we can replace the infrastructure with the kind of infrastructure that could ”.

Climate experts warn that global warming has increased the frequency of extreme weather events, with studies showing that temperatures in the UK are now 10 times more likely to reach 40°C than in the pre-industrial era. Drought and heat waves linked to climate change have also made wildfires more difficult to fight.