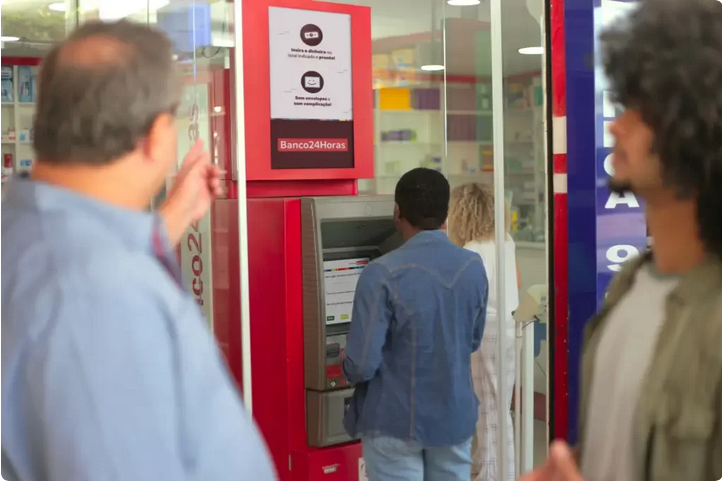 Launched in 2019, Mídia Banco24Horas is expanding its device fleet by 80%

Mídia Banco24Horas, a company that has screens with advertising content above Banco24Horas ATMs, is investing R$ 24 million to expand its market and enter new markets.

The resource will be applied in the distribution of 2 thousand full HD screens across the country, reaching 4.4 thousand devices where advertising brands can display their messages and communication strategies. The number represents an 80% growth over the current park of 2,400 devices.

“We grew up and are living through a pandemic period and now, this year, is the time for a full recovery”, says Celia Simões, marketing and product manager at TecBan, manager of Banco24Horas. The company has been in the market for 40 years developing solutions for the financial market, ranging from ATMs, integration platforms to armored car services.

What is the business challenge

The company was launched in 2019 after two years of studies and planning on how to add more revenue to the terminals, used for withdrawals, transfers and recharges, among other services, and responsible for handling BRL 370 billion per year.

Developing technological solutions for the financial market for 40 years, TecBan wanted to find ways to take advantage of the ‘audience’ of the 152 million people who pass through the 24-hour teller each month, spread over more than a thousand cities, according to internal data.

And the investment in the outdoor media solution, which had been on an upward trajectory, proved to be the best path. Since then, the company has had among its clients brands such as Boticário, Oi, Uber, McDonald’s and government agencies.

“Mídia Banco24Horas is important for the TecBan group, as it is part of the strategy for new products, optimizing an important asset for the company, which is the ATM”, says the executive, without disclosing the operation’s numbers.

Now, it works to expand the capillarity of the business, covering new points and regions. 30% of the screens will be in new squares.

How will the distribution

In the division by regions, the Southeast, where it already has a greater presence, will also be the area with the largest distribution, 49%. The Northeast appears in second place, with 29%, and will have coverage in all capitals and in some more important cities – before, the model was present only in Salvador and Recife. South, 10%, Midwest, 8%, and North, 5%, follow.

With the expansion, Mídia Banco24Horas will reach establishments, such as shopping malls, convenience stores and pharmacies, in 160 cities in 22 states.

The company’s movement follows a positive situation in the foreign media market in Brazil, which has registered solid growth in recent times.

According to the latest data from the Cenp-Meios survey, corresponding to the first half of this year, the segment registered BRL 886 million in investments – up 60.43% over the same period in 2021 – and reinforced its position as the third main destination for advertising resources, with 10.7%. Open TV and internet occupy, respectively, the first and second places.

With the implementation of the new screens, the company’s expectation is that the 2023 revenue will have a strong increase and reach 80% growth. For 2022, the estimated percentage is between 10% and 15%.

How is the digitization

Despite the digitization process and Pix, which suggests less use of ATMs, the company understands that paper money still has a long life and that cashiers can adapt to new realities.

“Today, the ATM has become a business hub. The customer does not necessarily go to withdraw”, says Simões, adding that Banco 24Horas has around 160 members, including digital institutions that do not have physical stores.

The company is also supported by data showing that global demand for ATMs grew by 2% in 2021, according to a survey by RBR, a research and consultancy company in payment methods and banking automation in the United Kingdom.

In Latin America, demand stood at 19%, with the introduction of 31,000 pieces of equipment. In Brazil, the increase was 25%, driven by the deployment of 4,300 devices by Banco do Brasil.

After listening to a variety of “no”, he…

Ladies occupy 14% of seats on Boards of…