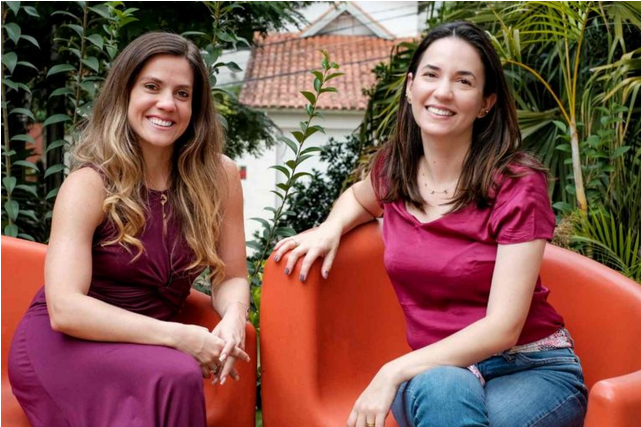 Marcia Cunha and Carla Moussali closely followed their mothers’ experiences with menopause. The stories are different, but they have one thing in common: the lack of information that these women had about their period. The topic is still taboo and most women have little knowledge about menopause and the changes it causes. According to a survey by venture capital firm Female Founders Fund As of 2020, nearly two-thirds of respondents (64%) felt unprepared for menopause. “Motherhood is associated with life, but menopause is still seen as something negative and that scares women”, says Carla.

It was with this in mind that Márcia and Carla founded, last year, the full pause, the first Brazilian femtech focused on informing women about menopause and offering products that solve some of its main symptoms. And today (20), in celebration of the World Menopause Daylast Tuesday (18), they are launching an application to accompany women during the climacteric.

After finding a problem to be solved, the entrepreneurs researched this market which, despite being little explored in Brazil, has great potential. That’s because the global population of postmenopausal people is growing. In 2021, women over 50 made up 26% of all women and girls globally, up 22% from the previous decade. According to the WHO, by 2030, there will be more than 1 billion menopausal women.

Globally, this market was valued at US$ 15.4 billion (R$ 81.3 billion) in 2021, and is expected to grow at an annual rate of 5.29% until 2030, according to a report by consultancy Grand View Research. There are US$ 600 billion (R$ 3 trillion) in opportunity for companies, according to the Female Founders Fund, but only 5% of the femtechs founded in 2019 aimed at this market, such as Márcia and Carla and actress Naomi Watts. “The women’s market is still seen as a niche. And convincing investors that this is important is still very complex”, says Carla.

Going through menopause, Watts launched Stripes, a femtech with products designed to address menopausal symptoms. “I went into this period completely lost and I want women to feel supported,” she said in a branded video.

The founders of Plenapausa made an initial investment of R$ 500 thousand to cover the costs of the first 24 months of Plenapause. And, 6 months later, they obtained 12% of the invested amount.

Márcia is an economist and worked for more than 18 years in the corporate environment and five as a psychoanalyst before deciding to undertake. A lawyer by training, Carla already had a company, LinkFit, a musculoskeletal health monitoring platform. She mentored Márcia in an acceleration process and ended up getting directly involved with the business. “I always wanted to set up a fund to invest in other women. And when I met Marcia I said ‘I can’t open a fund, but I can help a woman’.”

They want to democratize solutions for menopause, as hormone replacement treatment is not accessible to all. “Many women believe that there is only one way to solve the problem, hormone therapy”, says Carla. But the solution starts with information. “More than 60% of women do not know how to identify the first symptoms of menopause. Many of them try to look for isolated solutions for each one of them”, says Márcia.

Most women go through menopause between the ages of 45 and 55, according to the WHO, as a natural part of biological aging. It is caused by the loss of ovarian follicular function and a decline in blood estrogen levels. The transition can be gradual, usually starting with changes in the menstrual cycle, but it takes different forms for each woman.

The period is known precisely for hormonal changes, which usually bring symptoms such as hot flashes, sleep interruption, hair loss and vaginal dryness. Since its inception, Plenapause has digitized clinical analysis to map what this moment is like for women. “We launched this assessment on the website, where we indicate which stage of menopause this woman is in and the level of symptoms”, says Márcia.

The main symptoms cited by more than 4,000 women evaluated are lack of libido, tiredness, mood swings, anxiety and insomnia. And, according to the Female Founders Fund, 32% of women surveyed said their doctor doesn’t feel comfortable talking about it, which makes them look elsewhere for support.

Márcia and Carla started to develop products to support women with their symptoms. Today, they sell three herbal medicines that regulate symptoms and help to have more mood, energy, emotional well-being and a good night’s sleep. “It is a democratic way of relieving symptoms”, says Márcia.

They also felt the need to create a community around the topic. “We launched Prosas e Pausas, which is a monthly online conversation circle that is going into its 12th edition”, says Márcia. During this period, more than 200 women gathered to share experiences and listen to inspiring women and experts, such as gynecologist Natacha Machado, the startup’s clinical manager.

The application now appears as a solution for the 6 biggest symptom, muscle and joint pain, which affects about 80% of menopausal women. For this, LinkFit, Carla’s company, enters as a partner. “Our thesis is treatment, with herbal medicines or hormone replacement, and lifestyle changes, with food and physical activity,” says Márcia.

At first, whoever buys the products will have access to the application during the treatment period, with individual protocols developed by specialists and a kind of agenda to accompany the entire period.

With the application, entrepreneurs seek to expand their operations from B2C (business-to-consumer) to B2B (business-to-business), at a time when companies are offering health-related benefits. According to data gathered by femtech, at menopause, 87% of women feel emotionally unstable and 58% say they feel less productive at work. “In menopause, a woman is no longer reproducible. And there is an idea that a woman who is not reproducible is not productive”, says Márcia.

Menopause often coincides with an important moment in women’s careers, but the subject is still far from the world of work. “I’ve heard reports of executives who are in the middle of a meeting and start having hot flashes and feel intimidated to say something”, says Márcia. According to her, companies need to take information to their employees and promote a welcoming environment.