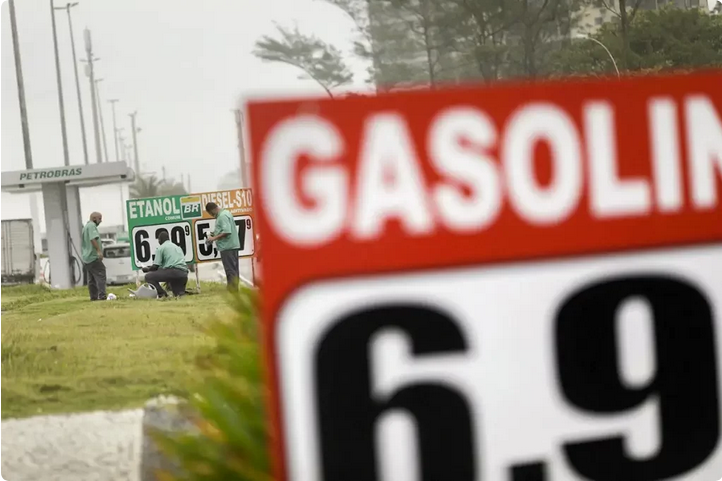 The governor of São Paulo, Rodrigo Garcia (PSDB), announced this Monday that the state will immediately reduce ICMS rates on gasoline from 25% to 18%, which could reduce the price of gasoline at the pumps by up to Rs. $0.48. The tax cut went into effect yesterday. The government of Goiás followed São Paulo and announced a reduction in ICMS.

The movement could weaken the mobilization of the states, which were planning a joint action, and open space for new reduction announcements.

PSDB’s pre-candidate for reelection in São Paulo, Garcia said that the São Paulo Procon will put inspectors on the streets to disclose the average price of gasoline at gas stations so that consumers can check in which there was the full transfer of the tax reduction. In the accounts of the Secretary of Finance, the decrease in the final price could reach R$ 0.48 per liter of gasoline:

— ICMS is not and has never been the villain of fuel prices in the country, we have a price policy that belongs to Petrobras. I hope that Petrobras and the federal government take measures so that we do not see more gasoline price increases in the coming weeks.

The ICMS reduction occurs due to Complementary Law 194, sanctioned by President Jair Bolsonaro (PL) last week, which limits tax rates on fuel, electricity, communications and public transport. But the president vetoed financial compensation from the federal government to the states to guarantee resources in health and education.

Garcia says that, with the tax waiver related to gasoline alone, São Paulo should lose R$ 4.4 billion annually, which will reduce state government investments in Education and Health. The governor called the reduction a “great sacrifice”.

Although the reduction in ICMS can lead to a drop of up to R$0.48 in the price of gasoline at the pump, since the beginning of the year the average amount charged at gas stations in São Paulo has already increased by R$0.625.

The governor of Goiás, Ronaldo Caiado (União Brasil), announced the reduction of ICMS rates on fuel, electricity, telecommunications and public transport in the state. In the case of fuels, the expectation is that the price reduction at the pump in the state will reach R$ 0.85, in the case of gasoline.

A group of secretaries, of which Felipe Salto, São Paulo’s finance secretary, is part, articulated a unified movement for today, after the conciliation meeting with Minister Gilmar Mendes of the Federal Supreme Court (STF) on the dispute over the ICMS

The group met on Sunday morning and exchanged messages throughout the day, but Salto said nothing, said one interlocutor, according to which the secretaries “were outraged”. Salto allegedly claimed that the governor ordered the reduction and that the decision was taken at the last minute.

Interlocutors who follow the negotiations between the states said that the surprise was general, and that there was no previous signal that São Paulo would make this move. Finance secretaries and governors have been talking about the subject, but there was still no consensus on a possible questioning of the law that fixed the ICMS ceiling and on how to reduce the tax.

Since the law was enacted last week, state attorneys general have been studying how to proceed. The understanding of 22 of the 27 prosecutors is that it is necessary to send a bill to the legislative assemblies. Despite federal law, states are responsible for setting ICMS rates.

For the secretaries, São Paulo’s decision weakens the governors’ plan to stop the effects of Law 194 (PLP 18).

“After São Paulo, it will be difficult to hold on to other states, which must follow suit,” said one secretary.

According to an interlocutor, the plan is to wait for what Rio de Janeiro, which charges a 34% tax on gasoline, will do, because it is one of the states that will lose the most revenue.

For now, the governors defend an articulated movement, with an agreed decision, leaving São Paulo and other states that do the same isolated.

Some states have already decided to wait. Bahia is still awaiting conciliation in the STF to define the next steps. The allegation is that there are doubts about prohibitions during the electoral period and whether the rate reduction would constitute a tax benefit.

The state estimates that it will lose R$ 5.5 billion. Currently, the state has a rate of 22.6% for gasoline and 12.2% for diesel. In Pernambuco, the situation is the same.

In the Federal District, there was no change in the ICMS on ethanol and gasoline, nor standardization of the tax rate. “With the President of the Republic’s vetoes to the recently approved PLP, final deliberations by the National Congress on the subject are awaited”, informed the Finance Secretariat.

“I hope that Petrobras and the federal government take measures so that we do not see more gasoline price increases in the coming weeks.”

Petrobras proclaims a R$ 0.22 discount within the liter…

Petrobras announced a new reduction in the price of diesel for distributors. Starting tomorrow, the state-owned company will sell the fuel…

Analysis exhibits a discount within the variety of small…

This is what the 14th Impact Survey of the Coronavirus Pandemic on Small Businesses points out, carried out by Sebrae Small…