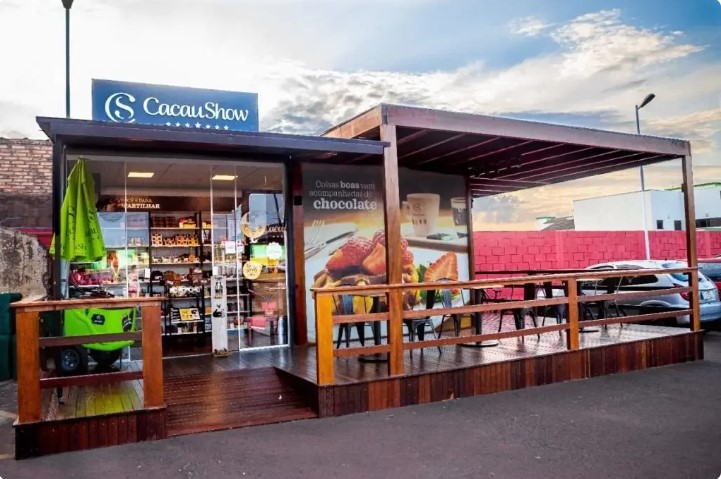 Check initial investment and payback time of some candy franchises

Who never left the house, passed in front of a candy store or confectionery and didn’t want to eat something? Cakes, chocolates, cookies, candies and other delicacies are a true passion of Brazilians.

According to a survey carried out by eCGlobal, about 30% of Brazilians consume sweets from two to three times a weekWhile 16% says eat some kind of candy every day.

check out deductibles for those who love and want to work with sweets:

Founded in 1988, Cocoa Show is a reference with regard to the world of franchising. The network has more than 3,100 stores spread across all states of Brazil.

Created by the Argentine Mariano Grosso, the franchise network specializes in pavlovas, a product still little known in Brazil, which can be strawberries, red fruits, bananas with dulce de leche, yellow fruits and citrus. It also sells sweet and savory meringues that can be coffee, chocolate, lemon, tangerine, parmesan, etc., in addition to producing artisanal jellies.

The largest chain in the homemade cakes segment offers a menu with more than 100 flavors in your more than 400 units in operation.

Founded in 2012 by businessman Raul Matos, Biscoitê is a franchise network whose mission is to offer several versions of cookie recipes. In 2016, it was elected by Endeavor, one of the main entrepreneurship institutes in the world, as one of the 15 Brazilian brands with the greatest potential for growth. The franchisee manages the unit, from purchases to customer service.

Created in 2015, SOW Cake Lounge is a rfranchise network in confectionery and coffee shops with first-rate products. Concerned with the customer experience, the brand offers cakes that range from Sow, from the house made with almonds and Brazil nuts to Sicilian lemon with blackberries, in addition to snacks, pies, cheese bread and other delights. Gluten, lactose or sugar free options are also offered.

AQ! donuts is a franchise specialized in donuts. From Campinas, in the interior of São Paulo, the company was born with the ideal of providing delicious moments and an escape from routine to its customers. The brand was designed to offer a complete mix of flavors and superior quality. Donuts, cookies, brownies, coffees, cappuccinos, and a variety of drinks ranging from Italian soda to milkshakes are offered.

Cinnaroll is a franchise network specializes in cinnamon rolls — the Cinnamon Rolls — as well as selling delicious donuts, bagels and coffees from ice cream and ice cream to traditional ones.

Brookies was created in 2017 through the passion of businesswoman Fernanda Ribeiro for the kitchen. Being brownies and cookies franchise, she also offers her creation, the brookie, which unites the two. The ingredients are selected and the whole experience is thought out with care so that customers can build good times.

the story of Copenhagen it began to be written in 1928, but it was in 1996 that a new chapter would begin to be designed with the CRM Group, after the executive Celso Moraes bought the brand. Since then, Kopenhagen has grown through a robust expansion of franchises, mixing the great classics of the brand, such as Nhá Benta and Língua de Gato, with great innovations such as, for example, the SoulGood health platform.

Created by the CRM group to be a pop brand, Brazil Cocoa has a lot of personality and products that have the face of Brazil. The brand’s latest initiative was the launch of the Brasilidades Platform, made up of several product lines whose main appeal is the flavors most loved by Brazilians, such as brigadeiro, cocada and paçoca.

THE MyCookiesone of the largest chains in the country specializing in the classic American cookie, has more than 50 units in 10 states across the country.

With 40 years of history, the bakery Love in pieces sells delicious handmade recipes in pieces or whole. The franchise network has 45 units open in 11 cities.

She invested R$800 in a enterprise to promote tapioca;…

Franchise truthful has enterprise recommender with funding from R$…