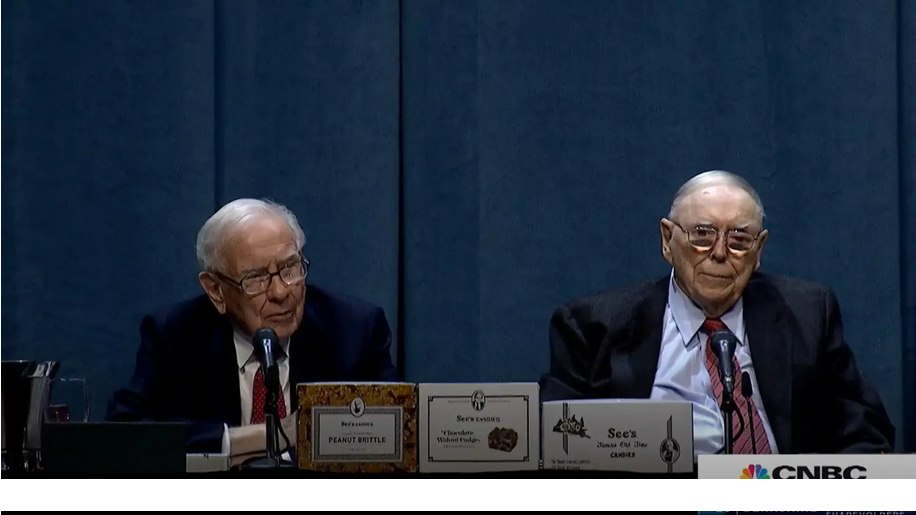 Markets have behaved like a casino in recent years, says Warren Buffett

After three years since they last met in person with shareholders, Warren Buffett and Charles Munger were once again in front of tens of thousands of people attending Berkshire Hathaway’s annual meeting this Saturday (30). Due to the size of the audience attending the conference in Omaha, Nebraska, the event became known as the “Woodstock of Capitalism”.

Buffett kicked off work by presenting Berkshire Hathaway’s quarterly results, released before the conference began. THE holding reported a 53% drop in Q1 net income to $5.46 billion. But Buffett prefers to highlight the $7 billion operating profit, which was roughly flat from a year earlier, and said there were “no surprises regarding the results.”

The manager’s first quarter was marked by a large volume of stock purchases in the US market, of US$ 51.1 billion. The peak of purchases took place between February 21 and March 15, period in which Berkshire disbursed US$ 41.025 billion. After that, according to Buffett, the market became “lethargic”. In April, the company did not buy shares.

The legendary investor also said that Berkshire Hathaway will always have plenty of cash to take advantage of opportunities when they arise.

“We will always have a lot of cash. It’s like oxygen, it’s there all the time, but if it disappears for a few minutes, it’s all over,” Buffett said.

THE holding also ended the quarter with a cash holding of $106.3 billion.

When answering questions from shareholders, he released a criticism: he said that, in the last two years, the markets behaved like a casino or bookmakers, with the stimulus of Wall Street.

“Berkshire Hathaway was able to buy 14% of Occidental Petroleum in two weeks on the open market. Think how absurd this is. A lot of people were treating the market like a casino,” he said.

The audience also asked questions about insurance companies Geico and Progressivo, controlled by Berkshire, and an investor brought up an unusual question about the risks of nuclear war for these companies. In a good-natured way, Munger quickly replied: “if there is a nuclear war, I will crawl under my desk and say goodbye to the world”.

Buffett said the world is in the midst of a “heads or tails” game in the face of the destructive potential of nuclear weapons available today. Overall, Berkshire Hathaway fails to measure its exposure to the risk of a war with nuclear weapons.

The biggest in the portfolio

Thus, Chevron enters the “top 4” of Berkshire, after American Express (US$ 28.4 billion), Bank of America (R$ 42.6 billion) and Apple, where the manager has a share of US$ 159. .1 billion invested. During the conference, Buffett claimed to have bought more Apple stock in the first quarter of the year. The company’s CEO, Tim Cook, is in the audience at the event.

Buffett and Munger received an assertive question from a young investor: which company would they choose to invest in, knowing it would perform well in a tough market scenario. Mega investors didn’t even choose a name, but left a warning about cryptocurrencies.

“If someone tells you to invest your retirement money in bitcoins, say no,” Munger said, drawing laughter and applause from the audience.

Buffett was asked about Berkshire’s future and the mega-investor said there was no reason to worry. The culture that prioritizes the shareholder must remain, even when he is no longer with the company. “If we have the same culture, we will be here 100 years from now,” he said.

Earlier, Charlie Munger called the proposal to remove Buffett from the job “ridiculous” board from Berkshire Hathaway. Calpers, the pension fund that manages the retirement of California civil servants and a shareholder in the company, proposes that Berkshire’s board of directors have an independent chairman.

Currently, Buffett is CEO and also chairman of board.

Keeping an eye on China

When asked about the Chinese government’s heightened regulatory stance that affected a number of Chinese company stocks in the past year, Munger pointed out that the local government was trying to make American investors more wary.

According to him, there was a tension and this ended up affecting the prices of several papers. Despite this, Munger said the recent signal from Xi Jiping, Chinese president, brings a certain “hope”.

Last Friday (29), at the Politburo meeting led by Chinese President Xi Jinping, the country’s representative said that he will support industries and small businesses hit by Covid. In addition, he informed that he will accelerate work on infrastructure and stabilize transport, logistics and supply chains. The information was published in a statement on the central government’s website.

For Munger, the reason for holding a position in China today is due to prices. “I can have a lot more shares at cheaper prices.” While the latest signs have brought some relief, the Berkshire shareholder did not deny that investors are more concerned about China now than they were three years ago.

One of the creators of the TSE electronic…