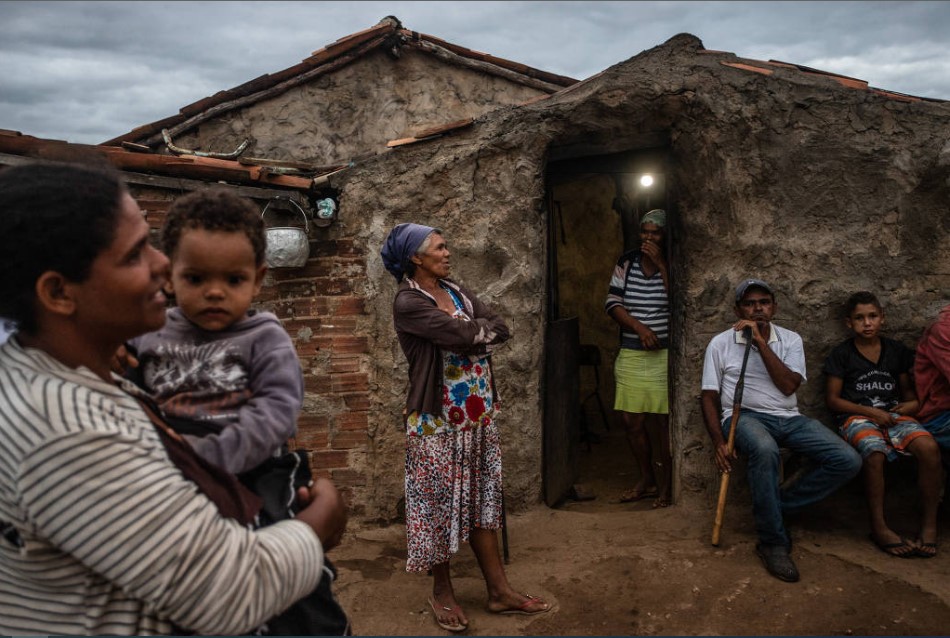 In pockets of poverty in the Northeast and Midwest, discouragement and hope drive decision in the election

The sun shines through the holes in the awning that covers the place where André Rosendo Lapa, 17, is bent over a rock with a hammer in one hand and a stake in the other. The hammering produces a high-pitched sound as iron hits stone, broken into equal parts until it becomes a cobblestone.

Beside her, her father, José de Souza, 50, does the same job. The goal is to produce 1,000 cobblestones per week, whose sale to middlemen is the family’s main source of income. The supplement comes from Auxílio Brasil, adjusted for three months from R$400 to R$600 at the start of the presidential election.

The change did not make Souza review his vote, as did most of his neighbors in Coronel João Sá, a city of 17,000 in northern Bahia, where more than 90% of the population lives in poverty and extreme poverty.

In an election marked by worsening living conditions and food insecurity, the package of goodies that includes the temporary readjustment of aid is put in check as an electoral tactic.

Inflation that erodes purchasing power and the discouragement generated by lack of opportunities are the main obstacles to transforming extra income into votes for President Jair Bolsonaro (PL) in the poorest strongholds.

From 2019 to June 2022, inflation rose 26.5% in Brazil, according to the IBGE (Brazilian Institute of Geography and Statistics), an increase driven by the rise in food prices.

The country is also experiencing a setback in food security, with 33 million people going hungry, according to the Brazilian Research Network on Food and Nutrition Sovereignty and Security.

In the village of Alagoinha, in Coronel João Sá, Noélia Maria da Cruz, 35, puts water in the pot to make the green beans that she cooks on the wood stove yield. The gas stove, whose price per cylinder reaches R$ 130 in the region, is only used for quick preparations, such as boiling water to make coffee.

Her husband, Élcio Batista dos Santos, 40, also breaks stones. As he does not have his own land, he buys the entire stones in third-party areas and works to pay for the investment, leaving a small profit margin.

Auxílio Brasil completes the income, but expenses include food, gas, water, energy, in addition to expenses with children aged 15 and 4. The account does not close.

“They put this aid there, but it doesn’t keep up with inflation, so it’s no use. You take R$ 600 and go to the market, you can’t close the month”, says Élcio, who doesn’t see in Bolsonaro a president who works for the poor: “There’s not a rich person who thinks he’s bad”.

In the house opposite live Josefa Maria da Cruz, 62, and her husband, José Américo da Cruz, 62, known as Dequinha. The family became evangelical, and since then, he has stopped performing in forrós to play the accordion at the services of the small church built in the community.

In the family, however, it is pocket, not religion, that is the decisive factor in voting. Josefa, who avoids talking about politics with the pastor, criticizes the rise in food prices and says she will vote for former president Luiz Inácio Lula da Silva (PT). The couple’s daughter, Naldira Maria da Cruz, 34, follows the same line: “I will vote for Lula, and whatever God wants. We are already dying.”

Support for PT members has been almost a rule in the city since 2006. Four years ago, Fernando Haddad obtained 87% of the votes in the second round of the presidential election. In the first, governor Rui Costa had 92%.

The geography of local voting is complex and generates unorthodox arrangements. This year, Mayor Carlinhos Sobral (MDB) will support Jerônimo Rodrigues (PT) for the government. But for federal deputy, it is closed with Roberta Roma (PL), wife of João Roma (PL), former minister of Bolsonaro and candidate for governor.

Sizino Alves, 62, will vote for the names supported by the mayor, even if they are antagonistic, but says he will only not follow Sobral if he asks for a vote for Bolsonaro. The retiree, who will vote for Lula for the first time, justifies his choice due to inflation that made “diesel more expensive than gasoline” and the increase in Auxílio Brasil close to the election. “Increase for just three months? Why didn’t you just go back a year?”

The perception of aid readjustment as an electoral measure is recurrent. A Datafolha survey carried out in July shows that, for 61% of voters, the main objective of the benefits package is to win votes for Bolsonaro. Another 56% consider the amount of R$ 600 insufficient.

On the other side of the divide, the scenario is similar. IBGE data point to Sergipe as the Brazilian state in which poverty grew the most from 2020 to 2021: the advance was 12.5 percentage points.

Residents of Pedra Mole, a municipality of 3,000 in western Sergipe, Fabiana Oliveira, 20, and Emerson Fontes, 21, are unemployed and depend on Auxílio Brasil and a state benefit.

Of the monthly family income of R$530, about R$110 is spent on cans of powdered milk for the six-month-old daughter.

Neighbor Silvanira dos Santos, 31, also depends on Auxílio Brasil for basic expenses. With the program, he pays R$ 200 of the house rent, and the rest goes to energy, food, gas and medicine.

The water supply was cut off for non-payment. Even with complaints due to the scarcity of resources, she classifies the Bolsonaro government as regular: “I don’t think it’s bad, but those things aren’t there either. There was this help that helped several people, if there was nothing it would be worse”.

President of the Rural Workers Union of Pedra Mole, José Ednaldo dos Santos, 40, voted for Bolsonaro in 2018 and says he must repeat the vote.

He praises Lula for programs like Prouni, which allowed his son to graduate in law. But he says he has no criticism of Bolsonaro. “I don’t like fanaticism. Past rulers have excellent programs, and this government does not disappoint either.”

José Pereira da Silva, 58, who sells cilantro door-to-door in Pedra Mole, is also a Bolsonaro voter. He says that Lula’s supporters are the majority in the city, but that the readjustment of Auxílio Brasil can make a difference in the election.

It is the same diagnosis of Bolsonar candidates for state governments in the region. Not for nothing, João Roma anchored the narrative of his campaign in the benefice.

In a video, he walks through a market next to a housewife and says that the R$ 600 monthly program is higher than the Bolsa Família average and is enough to “buy even steak”.

Governor candidate Jerônimo Rodrigues (PT) made a similar video, but with the opposite argument. In the market, he compares the prices of basic food items to the values ​​of the same products in PT governments.

But neither the increase in Auxílio Brasil today nor the memory of benefits from the past alone are capable of deciding the vote, points out sociologist Antônio Lavareda, from Ipespe (Institute of Social, Political and Economic Research).

“People don’t vote to express gratitude. Consciously or unconsciously, the vote has more to do with who will be able to improve life in the future,” she says.

He says he believes that the readjustment of Auxílio Brasil can improve the government’s assessment among the approximately 20 million potential beneficiaries, but tends to have a limited effect. In general, he will be able to convince those who already tended to vote for Bolsonaro, but were still in doubt.

The chances of reversal of votes by voters from Lula to Bolsonaro are small. “It is possible that Bolsonaro convinces voters that he will keep [o auxílio em R$ 600]. But it is much more difficult to convince Lula that he would not keep it either, especially because of his image that has solidified over time.”

In addition, there is a possibility that the “Auxílio Brasil Turbo” will result in an adverse electoral effect on a contingent that reaches 47 million people: those who received emergency aid during the pandemic and now do not have access to any social benefits.

“We have now reached a brand new degree”,…