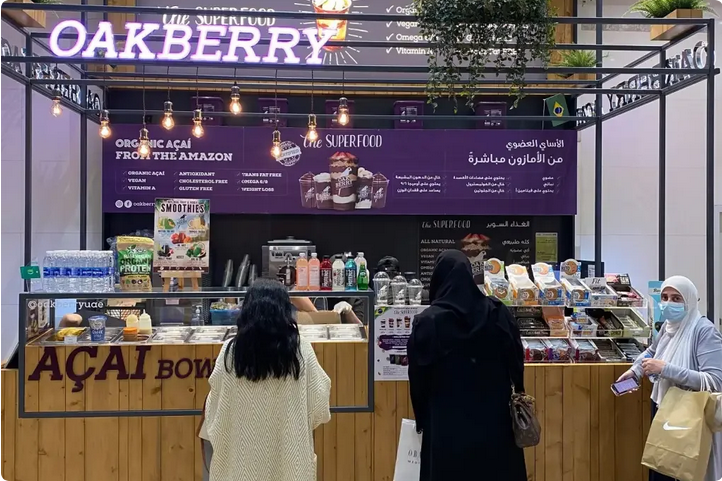 The arrival in Qatar happened as part of the company’s internationalization process, which started in 2019

Host of the World Cup, Qatar has also become a reference for oakberry🇧🇷 The Brazilian açaí franchise network has eight stores and kiosks in the country among the 600 spread across 38 countries. And it is from there the unit that sells the most worldwide.

Launched in 2020, the franchise located in Lagoona Mall, a shopping center in the capital Doha, was the first in Qatar and makes $150,000 every month🇧🇷 On average, stores abroad revolve around $42k🇧🇷

In the country, more than 70,000 açaí bowls and smoothies are sold every monththe fruit of the Amazon region that has conquered the world in recent years.

According to data from Fiepa (Federation of Industries of the State of Pará), the state with the highest national production, exports grew by almost 15,000% over the last ten years, between 2011 and 2021🇧🇷

All franchisees are Qataris and consumption habits are “very similar” to what can be seen in southeastern Brazil. “Always fruits, granola and nuts”, says Georgios Frangulis, Founder and CEO of Oakberry Acai🇧🇷

The arrival in Qatar happened as part of the company’s internationalization process, which began in 2019. Of the 600 franchises, 400 are in Brazil and 200 are abroad🇧🇷

“Today, a good part of Oakberry’s revenue comes from stores abroad. We understand that the Middle East as a whole is an important and very promising market, so we hope to expand further in that region,” says Frangulis.

To take advantage of the World Cup atmosphere in the country, the brand is present with its products in the five areas of the FIFA Fan Fest, spaces where fans can watch the games. Another action is a partnership with the Brazilian Football Confederation (CBF) to offer açaí every day to the team commanded by Tite.

According to the executive, the company is “hot foot” in competitions. “The last one was our sponsorship of the Haas team in F1. Driver Kevin Magnussen had never been on pole before, and he achieved this feat the first time he took OAK and we had our logo on the car”, he says. To accompany.

How is the company?

The internationalization plan has intensified since the end of last year when Oakberry announced a fundraising of 90 million reais🇧🇷 With the resources, the company also started to invest in verticalization to produce its own açaí, from a factory in the city of Santa Izabel, in Pará.

The round involved two investment funds (FIPs) with 80 clients of the Kilima Asset manager and the Monte Bravo office.

“This year alone, the chain has already grown almost 100% in revenue and has always triple digits since its founding in 2016. The chain is expected to move R$ 500 million in sales this year. In 2021, the brand earned BRL 250 million”, says the founder.

New Bayer director says what it takes to…

In its greatest M&A, CRM&Bonus buys Giver and enters…