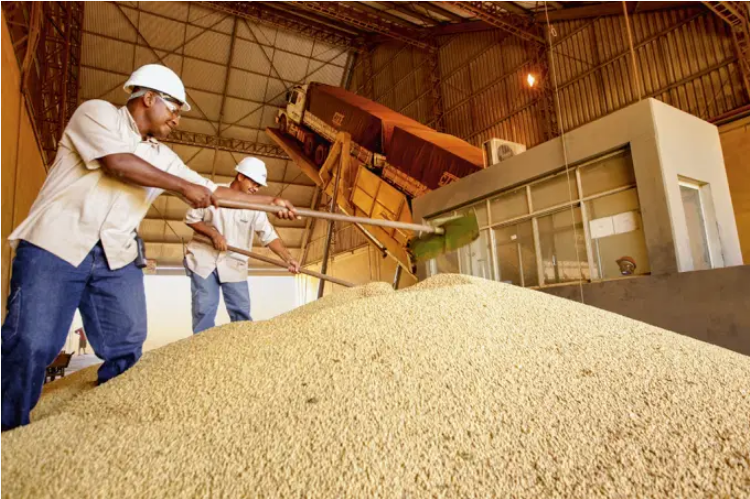 Food or fuel? War in Ukraine sharpens debate over using grain for energy

Activists want to divert raw materials away from biofuels, but would that alleviate rising levels of hunger?

Rising food prices caused by the Ukrainian War exacerbated the risk of famine, intensifying pressure on grain-based fuel producers and sparking a debate over “food versus biofuels”.

Before Russia’s invasion of Ukraine, global biofuel production was at a record high. In the United States, the main producer, 36% of total corn production went to biofuels last year, while biodiesel received 40% of the soy oil produced.

But some food companies and policymakers are calling for biofuels to stop being blended with gasoline and diesel at current rates, in order to increase the global supply of grains and vegetable oils for food.

“This is not the time [para os governos] encourage the conversion of food crops into energy through artificial policy stimuli or mandatory blending targets,” said the Washington-based International Food Policy Research Institute.

Russia and Ukraine together produce nearly a fifth of the world’s corn and more than half of its sunflower oil, but the countries’ agricultural exports are at a fraction of pre-war levels.

The total amount of crops used annually for biofuels is equal to the calorie consumption of 1.9 billion people, according to data firm Gro Intelligence.

Do biofuels cause problems in food markets?

Biofuels – ethanol, made from corn and sugar cane, and biodiesel, made from vegetable oils, including soy oil and palm oil – have been blended into motor fuel since the early 2000s to increase the supply of fuel. energy and reduce the environmental impact of fossil fuels.

Biofuels were blamed in part for the last food crisis in 2007-08. Studies, including by the World Bank and the IMF, have suggested that the growth of biofuels contributed 20% to 50% of the increase in the price of corn during the crisis.

Its increasing use was described as “a crime against humanity” by the then UN food rights rapporteur.

But biofuel producers say they played a minimal role this time around. “Biofuels did not cause this crisis – neither did the price nor the contraction in supply,” said James Cogan of Ethanol Europe, an industry lobby group.

The high prices have nothing to do with demand, but reflect “erratic trading conditions and high energy prices,” he added. Reducing biofuel production “would not materially alleviate the price crisis”.

A 50% reduction in grain used for biofuel production in Europe and the United States would make up for all lost Ukrainian wheat, corn, barley and rye exports, according to the World Resources Institute (WRI), a group of Washington scholars.

While agricultural production has increased along with biofuel production, meaning the amount available for food supplies has not decreased, biofuel use cannot increase exponentially without harming the environment, activists said.

“In a food insecure world, we need to think very critically about these limited resources, as we try to feed the world and solve the climate crisis,” said Oliver James, a researcher at Princeton University who helped compile the WRI data.

Maik Marahrens of Brussels-based environmental campaign group Transport & Environment said that in the EU around 10,000 tonnes of wheat, equivalent to 15 million loaves of bread, are burned daily as ethanol in cars.

Biofuels executives say the amount of wheat used in biofuels is negligible — about 2% of the total crop, according to industry association UFOP.

“In this context, it’s a little surreal to elevate wheat ethanol to even a topic of conversation in the current bread crisis,” said Eric Sievers, chief investment officer at ClonBio, which owns Europe’s largest grain biorefinery, located in Hungary, as well as Ethanol Europe.

Would it be more harmful to limit biofuels?

The industry is a major producer of animal feed, since the process of transforming grains into ethanol creates protein and fat by-products with which chickens, cows and pigs are fed.

In the EU, Belgium and Germany are considering relaxing guidelines on blending biofuels to address food safety.

The International Energy Agency has lowered its biofuel growth forecast for this year by 20%, predicting global demand will increase by 5% from 2021 to 8.5 billion litres.

In the US, where cheaper corn ethanol is the main biofuel, Washington has tried to contain rising gasoline prices by allowing the higher level of blending, which is normally reduced during the summer months due to pollution concerns, to continue. temporarily.

But government incentives for biodiesel and a decline in Ukraine’s global exports have increased competition for soybean oil, squeezing supplies to US food groups.

“[Os fornecedores de óleo de soja] can’t give me a quote [de preço] because they cannot accept my company. There’s not enough oil for everyone,” said Ed Cinco, director of purchasing at Schwebel’s, a bakery in Ohio.

While China has warned ethanol producers that it will “strictly control the processing of ethanol made from corn,” India is moving ahead with targets to increase blending quotas. The prices of sugar, the main raw material for bioethanol in the country, increased less than those of other crops.

While coordinated action on food security has moved rapidly up the agenda, there has been little debate about the limits of biofuels at the international level.

Instead, countries that use biofuels must balance food security and sustainability with energy costs and independence, said Nicolas Denis, a partner at McKinsey. Governments need to decide “what sustainable land use looks like given the different priorities,” he added.

Tipspace wants a million gamers on the 24-hour…

Health spending has to increase to…

US won’t ‘wait forever’ from Iran…

Brazilians tell how they exchange food…