Fintech Noh is one of the first to adopt PISP, the new Central Bank payment system considered the “evolution of Pix”

The massive adoption of pix, a payment and automatic collection system launched by the Central Bank a little over two years ago, has served as a backdrop for the unbridled growth of countless fintechs since then. THE noh is one of them.

Founded by entrepreneur Ana Zucato, the startup is committed to helping groups of friends, couples and other tribes interested in better managing group finances. Here, you can read shared accounts such as rent, bar orders and even food delivery.

Through an application, Noh offers a digital wallet and shared prepaid cards through which users can define “quotas”, that is, pre-established percentages for the payment of different debts.

With young blood and digital DNA, Noh also allows herself to take riskier steps. Now, just over eight months after its official arrival on the market, fintech becomes one of the first to test the Payment Initiation Service Provider (PISP), a payment system payment initiation launched by the Central Bank in 2021.

Launched by the Central Bank in 2021, PISP allows payments to be made at the request of the customer, in a way contrary to what is done today. In practice, instead of opening bank apps to access the Pix functionality to make a payment for a service or product (either via transfer or QRCode reading), the user can just authorize an establishment, virtual store or digital wallet to “pull ” the amount due from your bank account.

This authorization is made by the user in his bank application and, if he has more than one bank account, he can choose which one the money will be withdrawn from.

“Think of the following example: you place an order on iFood and, instead of copying the Pix code, opening your bank app to make the payment and then waiting for the update, you can simply authorize iFood to debit the value of the order. your account, with one click”, explains Zucato, CEO of Noh.

Behind the new feature at Noh is the bank BTG Pactual (from EXAME’s controlling group). The Bank will be responsible for operationalizing this functionality, acting as a third party in the connection between fintech and different banks.

“Our goal is to contribute to the financial ecosystem in an innovative way. PISP is one of the solutions that make up the Open Finance agenda and which we believe will significantly add to the way Brazilians transact their resources. We are excited to provide this solution to Noh”, says Marcos Xavier, partner and head of banking as a service at BTG Pactual. 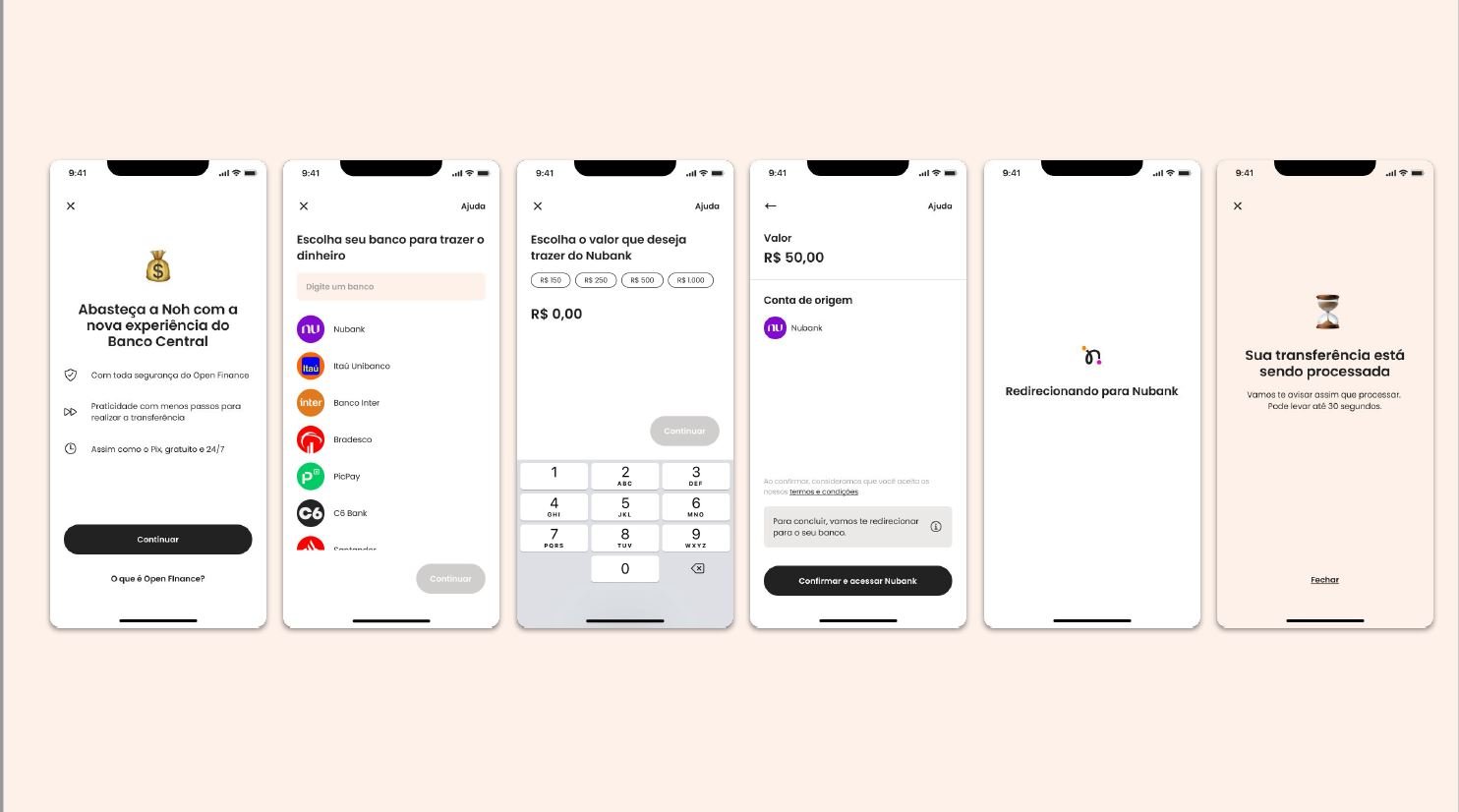 Experience of Initiating Payments in the Noh app (Noh/Disclosure)

Why does the company want to invest in this

Unlike Pix, which required banks to define a deadline for definitive and mandatory adoption, PISP remains without definitions regarding the adhesion of financial institutions. This is a scenario that, according to Zucato, places Noh in a privileged position against the competition. “We know that the risk is immense, even more so when we are talking about small fintechs as we are”, he says.

The high bet is justified, according to the entrepreneur, by the positive expectations. “If it follows Pix’s rhythm, it will undoubtedly be a success”, he concludes.

But if, on the one hand, there is a positive projection based on the success of the automatic payment system — currently used by ten out of ten people —, on the other hand, there is concern with the evolutionary curve of the product itself.

The absence of a deadline for the adoption of the PISP by companies can delay the development of the system, causing imbroglios for the few institutions that make use of the resource. “A consumer can face several difficulties in that first moment due to the lack of maturity of the technology, it will be a whole process”, says Zucato.

In practice, the PISP will provide Noh users with an additional modality for filling their digital wallets. “We want to help modernize the Brazilian banking system and, above all, help people’s lives. That’s the purpose,” he says.

Noh follows the trend already anticipated by other fintechs and retail companies. By adopting the PISP, the startup joins a select list of pioneering companies in the adoption of this technology, including Mercado Pago, fintech from Mercado Livre.

Officially launched in March of this year after an investment of R$ 17 million, Noh has been outlining optimistic numbers ever since. After a few months running in the testing phase, the application gained new features that are now used by something like 30,000 users — the current number of wallet downloads.

At first, Noh was limited to shared payments made by boleto and Pix. In May, they launched the virtual card, the startup’s current flagship and the company’s main source of monetization. “From the beginning, we knew that the card would be our biggest bet”, he says. “But the surprise was an unplanned growth, a sharp upward curve after this launch”.

Part of this growth is also due to social networks. Viral videos on networks like Instagram and TikTok boosted Noh’s reach, especially among younger people — today a primary focus among potential fintech customers. “We are a big laboratory and that includes my role as a content writer, all day long on social media simply because I realize that going viral is something great and that helps us with our social nature”.

On the market for eight months, Noh has already processed around R$5 million.

What to anticipate from the Labor Reform in…

Improvements in security and pilot tests of the digital real are also in BC’s plans The Central Bank employees’ strike, which…