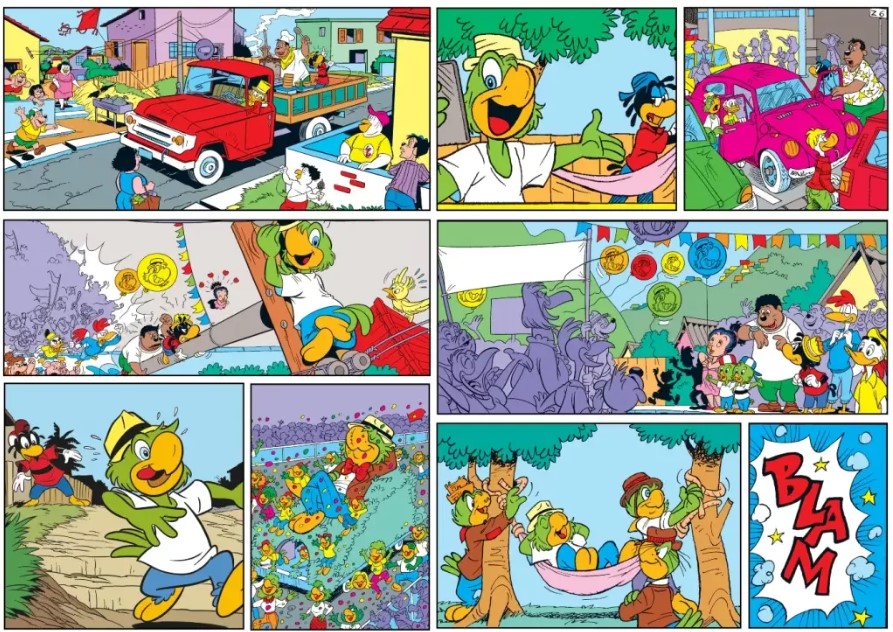 On the character’s 80th birthday, the company prepares actions in a robust marketing campaign; purpose is to bring Zé Carioca to the general public

For 80 years, Walt Disney has traveled to Brazil to understand in depth the culture of a people until then portrayed in an abstract way and without much depth by characters in films and comic books of the creative conglomerate he created. From the experience in Canary Islands, disney took a breath to create the studios’ first typically Brazilian character: the Zé Carioca.

The first and main representation of Brazilianness made by Disney, as a football fan and resident of the hills of Rio de Janeiro, Zé Carioca had his image reformulated in recent decades. Now, eight decades later, the company’s effort is to rename the brand attributed to the character, leaving aside the bohemia and irreverence and turning it into a cultural heritage accessible to the great masses.

Part of this effort is based on a marketing strategy parruda that includes publicity actions, partnership with clothing brands and ads broadcast on social networks for the next 12 months.

In celebration of the octogenarian character, Disney prepared a series of actions in a marketing campaign involving Zé Carioca — all of this, according to company executives, with a grandiose budget due to the new weight attributed to the Brazilian — although the company does not disclose the investment. in actions.

In one of these actions, Disney will release a song and a video clip in honor of the character, written by Leandro Lehart and sung by samba singer Xande de Pilares. The song will be released on digital platforms and on the company’s own radio on September 9.

“It’s a matter of proximity to the local culture, and that’s our priority,” said Yonatan Politi, vice president of licensing and brand strategy for Disney and Marvel in Latin America in an interview with EXAME.

According to the executive, the role of the licensing area — led by him — is to take care of bringing characters closer to the daily lives of consumers eager for products with some emotional or cultural appeal. In the case of Zé Carioca, what matters is precisely the second point.

This is a job that Disney has been working on for a long time. Recent releases by the studios seek to rescue local characteristics and cultural aspects of some non-Hollywood countries. This is the case of the animation “Encanto”, from 2021, which portrays Colombian diversity.

In addition to music, books, comics and special filters are planned to be released on Disney Brazil’s social networks — such as Instagram — starting this month. In addition, in the regular monthly publications of Editora Culturama, responsible for publishing the stories of Zé Carioca, there will be a new story published in November 2022, in a large almanac.

The Brazilianness of the actions

The signature of the campaign, as a rule, is also essentially Brazilian. All visual and branding pieces were developed by Brazilians, even if outside Brazil. “Our intention is to expand plurality beyond Rio de Janeiro and make Zé Carioca a Brazilian character and for all audiences”, says Tokie Esaka, Disney’s global creative director.

Achieving the feat depends on the handpicked selection of partners for the development of products, graphic arts and also items that make sense to the branding sustained by the character on the shelves (and racks) of stores throughout Brazil.

For this, one of the bets will be expand the list of partnerships with the fashion and beauty sector to the corners of the country and with an eye on brands that are more accessible to the general public.

It is a strategy that contrasts with the standards adopted until then, based on the association with more select brands and aimed at classes A and B, as in the case of the Carioca Farm. democratic,” says Esaka.

In other words, it is possible that, in the near future, clothes, accessories and the most diverse items involving Zé Carioca will be (almost) as common as those of Mickey, a striking symbol of Disney.

In the coming months, thematic collections of licensed products will be launched at retailers such as Renner, Pernambucanas, Havaianas and Go Case, of cell phone cases. A new nail polish line in partnership with Colorama should also debut in the coming months.

“Zé Carioca still has the ability to represent Brazil well, and we have a lot to explore with the character”, he says.

Ukraine will struggle to the top, says Zelensky…

Bradesco buys Votorantim supervisor to get nearer to…