In partnership with Sebrae and Abrasel, a new stage of the “Coca-Cola gives your business a boost” will invest around BRL 200 million to impact 300,000 businesses

As part of the celebration of its 80 years in Brazil, Coca-Cola starts a new stage of the platform “Coca-Cola gives your business a boost”. With training and content produced by Sebrae and the Brazilian Association of Bars and Restaurants (Abrasel), the platform aims to function as a hub for professional training and business development for small entrepreneurs.

During the pandemic, Coca-Cola joined its competitors, through the Nós movement, and created the Crescendo Juntos Microempreendedor program, for the small individual entrepreneur. “Now we amplify, intensify and connect more and more with our business, and we have the potential to reach more than one million points of sale. It is more than a commitment, it is a duty, a responsibility to use our business to be able to develop the economy”, comments Pedro Massa, vice president of operations at Coca-Cola Brazil.

Although the company works closely with the owners of points of sale, it has always been a job more focused on the development of small retail in the beverage sector. However, the arrival of the pandemic made the company expand its scope. “It was then that we realized that we had to go beyond our knowledge, talk about management, pricing, priority menu, so that there is no waste with so many ingredients”, says senior director of corporate relations Cone Sul at Coca-Cola Latin America , Silmara Olivio.

The purpose of this new phase of the platform is to provide training to small entrepreneurs, through partnerships with other companies and institutions such as Sebrae and Abrasel. Among the contents available on the platform are delivery, pricing, basics of finance, circular economy and digitization. With an investment of around R$200 million, the goal is to impact more than 300,000 businesses in just the first year of operation of the platform. “We approached partners we already had to gather this knowledge and that is what we are doing differently, taking this development of small retail in a broader way and far beyond our product category and our consumption occasion”, completes Silmara. .

According to Carlos Eduardo Pinto Santiago, deputy manager of competitiveness at Sebrae, Brazil has more than 43 million people of adult age who are starting a business or who are already running a business, in addition to 20 million active CNPJs, and three million CNPJs in the food retail and food service segment. “We have been following the need to train and train some subjects that were already a trend, but that with the pandemic have become more latent”, he adds.

The Coca-Cola platform also has two projects aimed at training and empowering women. Together with Sebrae and Coca-Cola Femsa, the company promotes the “Empreenda como uma mulher”, a mentoring program aimed at businesses led by women. The second project is “My business is my country”, which will take place in Salvador, Bahia, in partnership with Solar Coca-Cola and the Kuat brand, with the aim of fostering entrepreneurship through a platform focused on food. regional. During the first year of this new phase of the platform, the aim is to benefit 4,150 women.

According to Daniela Valverde, Senior Manager of Corporate Communications Cone Sul at Coca-Cola Latin America, the launch of the new stage of the platform “Coca-Cola gives your business a boost” connects with the company’s 80th anniversary campaign in Brazil , precisely because the campaign talks about “desires for the future” and the platform is one of the company’s initiatives to transform the world into a better place. “Our objective with the campaign is to let people know that we have been here for 80 years and tell them what we are doing today to make a difference in the future, what our desires are for the future. That’s the connection between campaign and action,” she says. 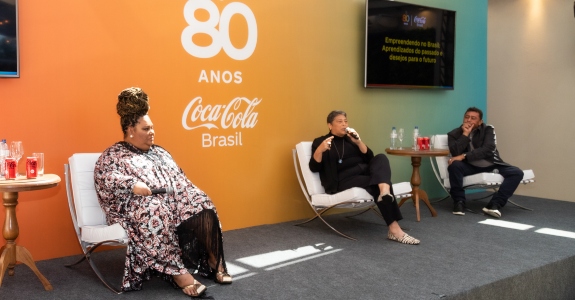 Coca-Cola invited three Brazilian food entrepreneurs to strengthen the new phase of the platform, with the aim of inspiring small entrepreneurs in this sector. Carmem Virgínia, chef of Altar Cozinha Ancestral and Yayá, and judge of the reality shows cooks in actionfrom the GNT, and from the Families Face to Face Brasil, from SBT, is the great ambassador of the program. In addition to her, João Batista, a cook for 38 years and presenter of the reality show Master of Flavorfrom Globo, and Katia Barbosa, a judge on the same program and chef at the Aconchego Carioca bar, are supporters of the project.

Daniela explains that the ambassadors are a key part of the project. “When people hear their stories, they connect. They understand that they can arrive, they see it as a possible future”, she says, reinforcing that, today, the influencer has this very important role to show his personal story and inspire people. “Partnering with these influencers brings a lot of this connection that is very important to us”, she adds. Silmara emphasizes the importance of ambassadors for the development of the project’s content. “They helped us a lot, as well as Sebrae, to put it in the language that the person understands”.

Companies function 3.2% beneath the height recorded in…

The challenges of the small e-commerce entrepreneur