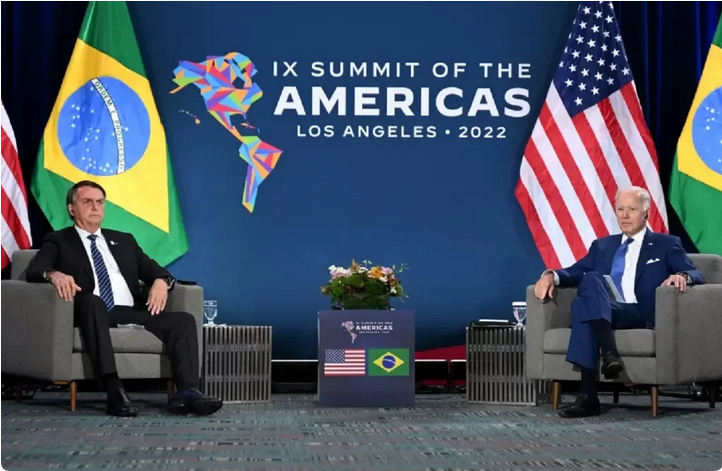 Bolsonaro cites Amazon and elections in Brazil in meeting with Biden

The statements came before the two presidents met behind closed doors in a room at the Los Angeles Convention Center, where part of the hemispheric meeting’s agenda takes place.

The president Jair Bolsonaro declared this Thursday, 9, that the sovereignty of Brazil is “sometimes” threatened in relation to the Amazon, during a meeting with the president of the United States, Joe Biden.

“Sometimes we feel threatened in our sovereignty in that area,” Bolsonaro said during the bilateral meeting between the two presidents at the Summit of the Americas in Los Angeles.

“Brazil preserves its territory very well,” insisted Bolsonaro, whose government is under international pressure to take stronger measures to protect the Amazon region.

With his positions in favor of commercial exploitation of the Amazon rainforest, Bolsonaro is repeatedly criticized by environmentalists and indigenous representatives. This week, he has been the target of protests by Greenpeace and activists.

The remarks came before the two presidents met behind closed doors in a room at the Los Angeles Convention Center, where part of the hemispheric meeting’s agenda takes place.
Biden, in a conciliatory tone, said that Brazil had made “real sacrifices” in protecting the Amazon rainforest. “I believe that the rest of the world should be able to help Brazil to preserve as much as possible”, he added.

Bolsonaro also cited the elections in Brazilwhich will be held in October, at a time when polls point to the former president Luiz Inacio Lula da Silva as a favorite.

“We want clean, auditable elections,” declared Bolsonaro, an ally of former President Donald Trump, who has always questioned the election results that led Biden to take over the White House in 2020.

“I arrived through the democratic route and I am sure that I will leave the government democratically”, he added.
Biden did not address the issue, but on Wednesday, his security adviser, Jake Sullivan, had revealed that the US president would emphasize the importance of “free and democratic elections” at the meeting.

Without a handshake, the two leaders posed for photos seated in distant armchairs, flanked by the flags of Brazil and the United States. The tone of the conversation was polite but cold.

Earlier, Bolsonaro spoke to journalists outside the hotel where he is staying in Los Angeles, ahead of the Summit meeting.

Despite Bolsonaro insisting that the Amazon is protected under his rule, the president has hinted that the disappearance of British journalist Dom Phillips and indigenist Bruno Araújo Pereira, who were on mission in a remote region of the saddle, was the result of the lack of an escort. “In that region you are usually escorted,” he said. “They went on an adventure, we regret the worst”.

In relation to the elections, there were also contradictions. “Do you trust the Brazilian election?” Bolsonaro asked a journalist, who answered yes. “Congratulations to you”, added the president, stating that the Brazilian electoral system “is not auditable”.

Bolsonaro landed in Los Angeles on Thursday morning. He said he would hold four more bilateral meetings, including with his counterparts in Colombia and Ecuador, but gave no details of his agenda.

In his first words to the press, Bolsonaro reiterated his criticism of Argentina and Chile, ruled by leftist presidents Alberto Fernández and Gabriel Boric.

“We are slaves to the elections we make”, he said, referring indirectly to the victory of the two leaders without mentioning them.

Bolsonaro will address the plenary of the Summit on Friday morning and in the afternoon he will leave for Orlando to inaugurate a consulate.

See which are the best restaurants for business…