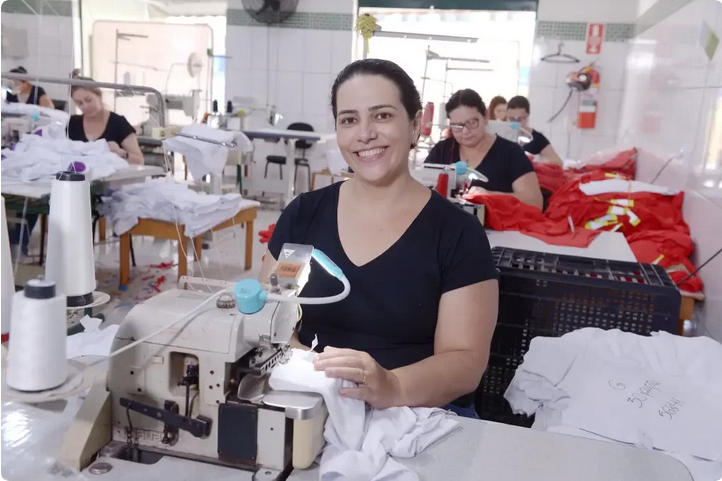 THE entrepreneur Paula Roberta Borsoi started producing her clothing in 2009 after leaving a job. She started in her living room, providing services to other companies, with three machines, initially focusing on items such as patchworking and retail blouses to transform them into coats, vests, among other pieces.

To acquire the machines, Paula took out a loan from an acquaintance and, as she was getting paid for the services, she paid off the debt. The entrepreneur had already worked in the field before opening a company and, therefore, had a good relationship in the area, which greatly facilitated the start of her business. “I started out knowing what I knew how to do, which was to sew. I didn’t do any kind of planning. I started my work taking orders from the company where I worked. It was a very small business and it was easy to have that control, everything was very good”, she recalls.

After three years of maintaining a smaller structure, the entrepreneur decided to formalize her business in 2012. She rented a shed, hired more employees and began to receive orders from larger companies.

Despite the growth of the enterprise, debts began to increase. “I was not aware that my costs would go up so much and I was very involved in the operational, so I left some very important issues aside. I delayed INSS guides and a number of other things,” she says.

At the same time, Paula’s demand for work increased more and more. To handle the orders, Paula Borsoi: “With Sebrae I was able to look at my company’s strategy and better organize my finances” she began to hire new employees, but she did not know how to measure her real production capacity. “I didn’t do a survey to find out if I really needed more employees. I hired without planning and, in 2015, I started to close in the red. I couldn’t see that the mistake was my management”, she says.

Despite having good contacts and high demand for work, there was a negative impact on revenue. To try to solve the problem, the entrepreneur took out more loans and the debt grew. Only when she started to participate in Sebrae’s training, she was able to see that the solution was not to increase production or hire more people.

“My first course was people management. That’s when I understood that it is necessary to train the team, meet goals. Then I did Empretec and left with such energy, with a very clear vision of where I wanted to go and what I had to do to make it happen.”

After going through these training sessions, Paula decided to organize everything she had to pay and started to establish priorities. “Empretec gave me a very important direction for me to be able to separate cash from individuals and legal entities; I understood that I couldn’t mix things up. With Sebrae I was able to look at my company’s strategy and better organize my finances. That’s the pillar of everything,” she explains.

“You need to have that balance and have the big picture to put out the fire before it starts. When I see something is wrong, I take action.” Thus, the entrepreneur managed to pay off all debts last year.

Business consultant Benedito Albiero was responsible for some of the training that Paula carried out focused on people management. He underscores the importance of developing good leadership to create a positive work environment, resulting in financial improvements. “Financials are just one part. If people are not involved, committed and understand that they are part of something, it’s no use. Paula managed to change her vision, receiving more collaboration from employees. She started practicing active listening and the results came, as we always say.”